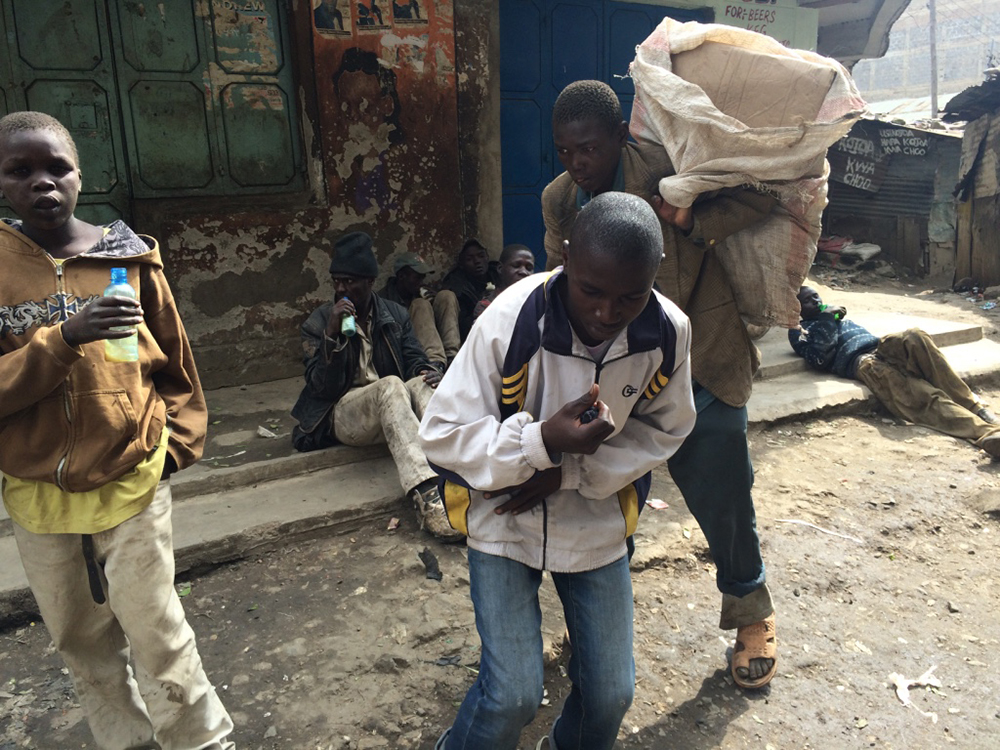 Youth and young men live, beg and use drugs on the streets of Kampala, Uganda, on May 2, 2018. Drug abuse is prevalent in the homeless street community. RNS photo by Doreen Ajiambo

KAMPALA, Uganda (RNS) — As dawn breaks in this bustling capital city of 1.5 million people, Pastor Moses Mugisa treks along a main road, carrying his Bible as he heads to the streets to meet young people abusing drugs.

In the Wakiso district near the capital, youths meet in various dens to smoke marijuana and shisha and to drink illicit alcohol. Along the street corners of other slums, young men and women gather in abandoned buildings and rubbish dumps.

“These young people smoke and sniff everything,” said Mugisa, 52. “The drugs turn them into near-zombies. But we are helping them to recover from the abuse.”

Mugisa, who ministers at Redeemed Church of God in Wakiso, said he was also a drug addict before he was saved by God. He is now giving moral support to people with substance abuse issues, trying to rehabilitate them and ensure they are as healthy as possible under the tough circumstances.

“I talk to them about my past experience and also encourage them to stop abusing drugs and go to rehab,” he said, reflecting on his past life. “We pray together because I understand this is more of spiritual healing than physical.”

Drug and alcohol abuse in this East African nation has affected thousands. Uganda has one of the highest per-capita rates of alcohol consumption in sub-Saharan Africa, and 9.8 percent of adults have an alcohol-use-related disorder, according to recent studies cited by the National Institutes of Health. A study of 12- to 24-year-olds in northern and central Uganda showed 70 percent had used substances of abuse and more than a third used them regularly.

The situation has prompted faith leaders in the country to intervene, with many urging the government to partner with the church to combat drug abuse among youths.

The Rev. Robert Muhiirwa of Fort Portal Catholic Diocese in Kampala recently said the church is battling drug abuse among youths, but he advised the government to partner with church-allied organizations or foundations to create awareness and treat addicts.

“It’s more worrying that we have lost many lives and resourceful professionals because of alcohol and drugs,” he said when he visited a rehabilitation center allied to the Catholic Church at Wakiso this month. The center serves at least 1,200 youths. “I urge the government to partner with us so that we can create awareness among our youths.”

In 2016, Ugandan lawmakers proposed new regulations on alcohol sales, including limits on bars’ opening hours. The measure has not passed, although Uganda does plan next year to ban the sale of sachet alcohol, sold in small plastic pouches.

Meanwhile, many addicts in Kampala and other cities across the country still walk the streets and alleys, scavenging for anything they can turn into cash and begging for meals.

Frank Mutebi, 21, said he didn’t know what he was getting into when he started using drugs and he wishes he had never tried them.

“I don’t know why I’m here,” he said, referring to his life on the streets. “I feel very high when I’m drinking alcohol and smoking bhang. It makes me complete and I can think properly like others. But it’s not something I like.”

Mutebi now wants to go to rehab but he said it was expensive for his parents. 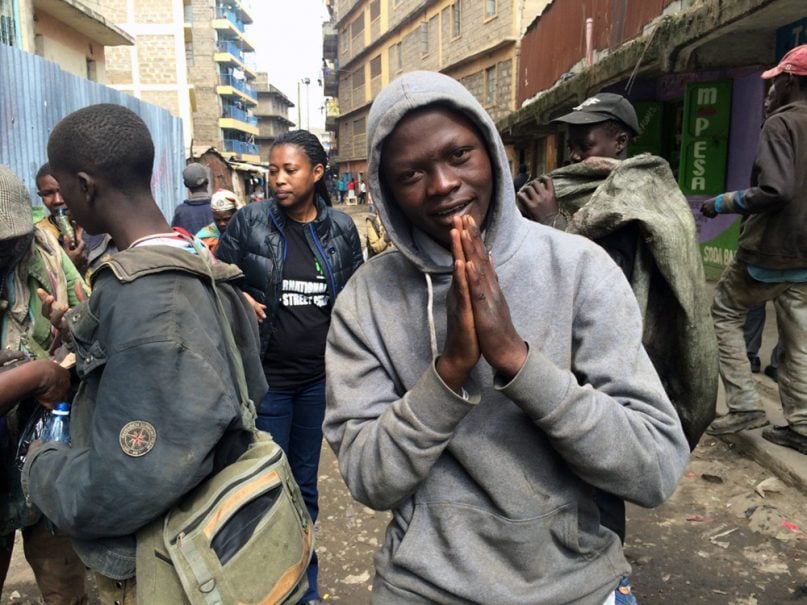 A Ugandan youth begs on the streets of Nairobi, Kenya, on Jan. 10, 2018. He came to Kenya in 2013 seeking work, but he ended up on the streets due to drug abuse. RNS photo by Doreen Ajiambo

Dr. David Basangwa, a psychiatrist in Kampala, said the rate of youths abusing drugs, especially illicit alcohol, is alarming. Most of the youths seeking treatment at his center are drug addicts who are warned of serious effects, he said.

“Abusing drugs of any kind can result in death from suffocation caused by the chemical entering the lungs and the central nervous system,” he said. “Youths should desist from taking alcohol and other drug abuse because it risks their lives.”

Meanwhile, Mugisa, the church pastor, said he will continue to save lives of drug addicts, but he urged the government to make treatment free for anyone willing to go to a rehab center.

“The problem is money,” he said. “Many youths are willing to go to rehab but they are told to pay for the services. It’s very expensive for their parents. I want to urge the government to make it free so that we can save many lives on the streets.”